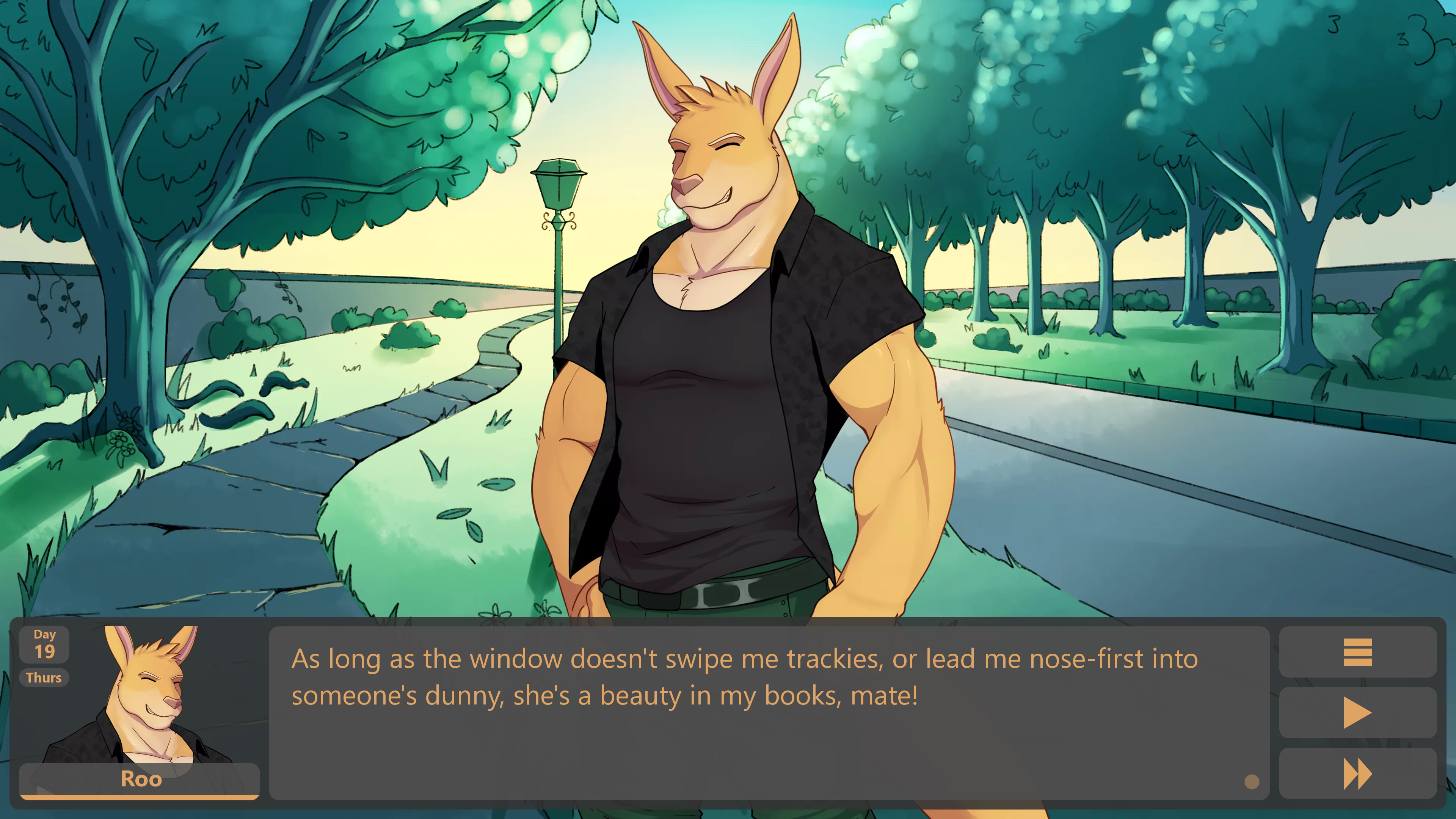 Well, well, well, what do we have here? Another Sileo update? Surely not?!

Yes, indeed! Today is the day another free update makes its way to your screens!

This update contains two additional chapters in Tai's Route, the addition of a new "character" named Huxley, a new background with three variants plus a new variant for an existing background, as well as a laundry list of fixes and improvements to make your Sileo experience that much better! This update also gives Tobias and Eric a ton of screentime and progresses (or closes) several outstanding plot threads.

This month's Patreon update is still a work in progress, and there is no ETA right at this moment. In the best-case scenario, we will be able to make a release today, but otherwise, it is hard to say. We'll go more into detail about this over on Patreon.

So, what are you waiting for? It's time to dig in! And remember - Sileo is only possible thanks to our supporters on Patreon! For as little as $5 USD, you can jump straight into next month's content with the upcoming release of the July Patreon Build! Additionally, you'll get previews of new artwork, a deeper look at development, the opportunity to have your name in the credits, and much more besides! Interested? Jump in here!

• Adds two new chapters to Day 19 (19x3 & 19x4) of Tai's Route.
• Added sprites for a new "character" - Huxley!
• Added new background for Lukas' Living Room (3 Variants)
• Added a new variant of the Concert Stage Background (Concert Live Dark) seen in 19x4.
• Improvements to sequences with long background transitions. These are no longer interrupted by other transitions taking place, and most now run for longer than they did before.
• Reorganized preferences and adjusted some of the wording.
• Very minor retcon to a detail RE Glenn's bandmates on Tai's Route Day 17.
• Fixed Eric's earring not being properly colored on his bashful expression.
• Fixed a visual issue in one of the CG's in the sex scene on Day 11 of Diego's Route.
• Fixed an instance on Tai's Route Day 13 where the wrong character was narrating.
• Fixed Diego wearing the wrong outfit for one line in 19x4 that was present in the last Patreon build.
• Fixed a number of minor issues with Dom's new sprites.
• Fixed an alignment issue with Roo's wink expression.
• Fixed missing character portraits on Day 14, 15 & 16 of Diego's Route.
• Fixed typos on Day 15 & 16 of Diego's Route and in the route menu during the 'Logan Nude' scene replay.
• Fixed an issue with Beth's gallery thumbnail. • Removed the button for Roux's nude sprite as it isn't unlockable, nor is it in the game files yet. It will return...
• Adjusted the usage of several Dom expressions during Day 16 of Diego's Route

im wondering when dom/axels route will come out

First question on the FAQ.

i just came across what seemed to be a bug. basically, on day 19 of tai's route, when the protagonist, tobias and diego are talking, the  sprites for diego and tobias kina duplicated and inverted colour like some demonic person. idk whether anyone else had this or if its just my device

That's definitely not something we've had reported before, and it definitely wouldn't be something within Sileo - it'd likely be a strange interaction between Ren'Py and your device.

ok thanks for that. its nice knowing a demon isnt gonna come out of my screen and eat me lol

oh gods, it's so weird reading Roo's speech; it's like my australian brain just snaps back into default settings and I get caught off-guard when Roux comments on Roo's aussie word choice.

I've been working hard to ensure his dialogue is as authentic as possible, and from what you're saying, it's sound like I've done pretty well!

Oh, absolutely spot-on mate. While you'll definitely find a lot of aussies who speak more 'normally', that's often from prolonged exposure to the english spoken by poms and yanks. Without that, you'll get a lot more true-blue aussies speaking like Roo does, and he's an absolute match for that crowd. So good job there!

If what Roo is saying makes perfect sense to us, but the rest of the world is left baffled and confused, that's fucking hilarious and a job well done in my books! And regardless, they'll keep coming back because even though he makes no sense, he's wonderful eye candy!

In all seriousness great work, as always, :D

I can only image they're all quite roo'd.