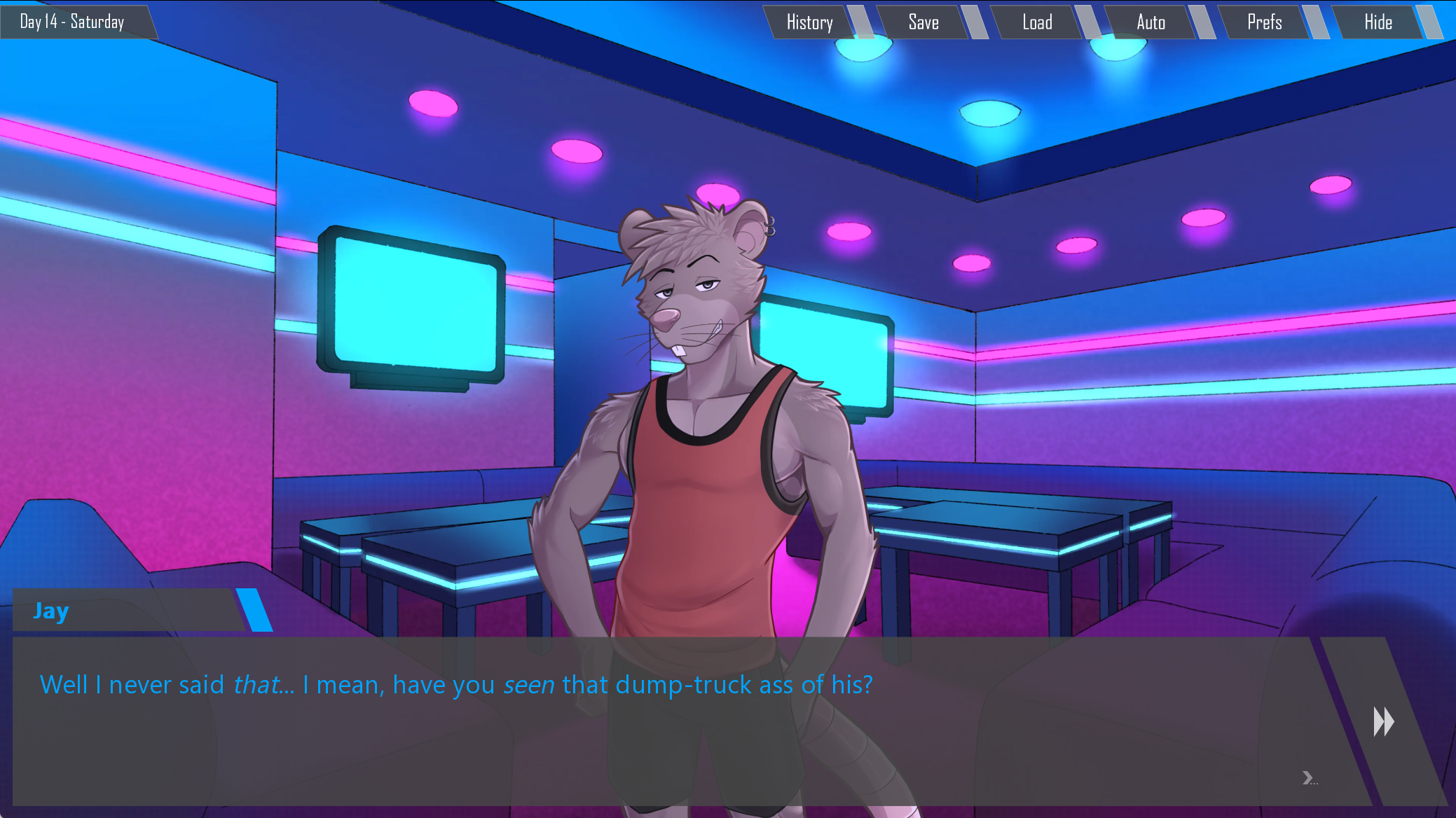 Now that Halloween is over and Mariah Carrey has been thawed from her cryogenic sleep to torment us all for the next few months, why not take your mind off the existential horror and play a brand new Sileo update instead?!

That’s right! Version 0.34 is now available for download on Itch.io and includes the first two chapters of Day 17! Spend some time at Tai’s bar, learning about Jay’s homeland and watching Axel sip one too many pina coladas, and enjoy a hot date with Tai that turns… well, rather shitty, I suppose you could say!

This month over on Patreon, three more chapters will be added to Day 17 including what is easily the biggest, best, and most bombastic sex scene we’ve ever done! In addition to that, everyone’s favorite blue dragon gets plenty of screentime (along with an annoying rat!) and Diego gets his meat out again! (Again!)

As always, if you’ve enjoyed our public update, be sure to swing over to our Patreon and show us some support for early access to new content! We’re two developers working full time on Sileo and it’s your help that puts food on our table and keeps our lights on!

Please Note: This month’s Patreon build will be delayed by a day or two as the final pieces of artwork are completed.

Thank you to everybody for all of your support, and we hope this new update eases the sting of Mariah Carrey’s prophesied return!

• Adds Chapters 1 and 2 to Day 17 of Tai's Route! (25k Words!)
• Introduces a new side character Maxwell.
• Updated Ren'Py to 7.4.10.2178 which is known to address a number of Android specific issues such as the corrupted save game thumbnails.
• Minor fixes & improvements with Kyrex, Axel, Diego, Russell and Tai's sprites.
• Fixes a number of typos as well as some truncated or missing words.
• Fixed a few remaining dead hyperlinks - whoops!
• Minor adjustments to Glenn's dialogue to line up with later interactions.
• Other minor miscellaneous fixes and improvements.
• Hotfix Build 3401: Fixes Kyrex's sex scene traceback error.

OK Xevvy seriously, you have GOT to stop making these characters so hot! (Please don't actually.) That Maxwell guy? Lord, someone get me a towel! 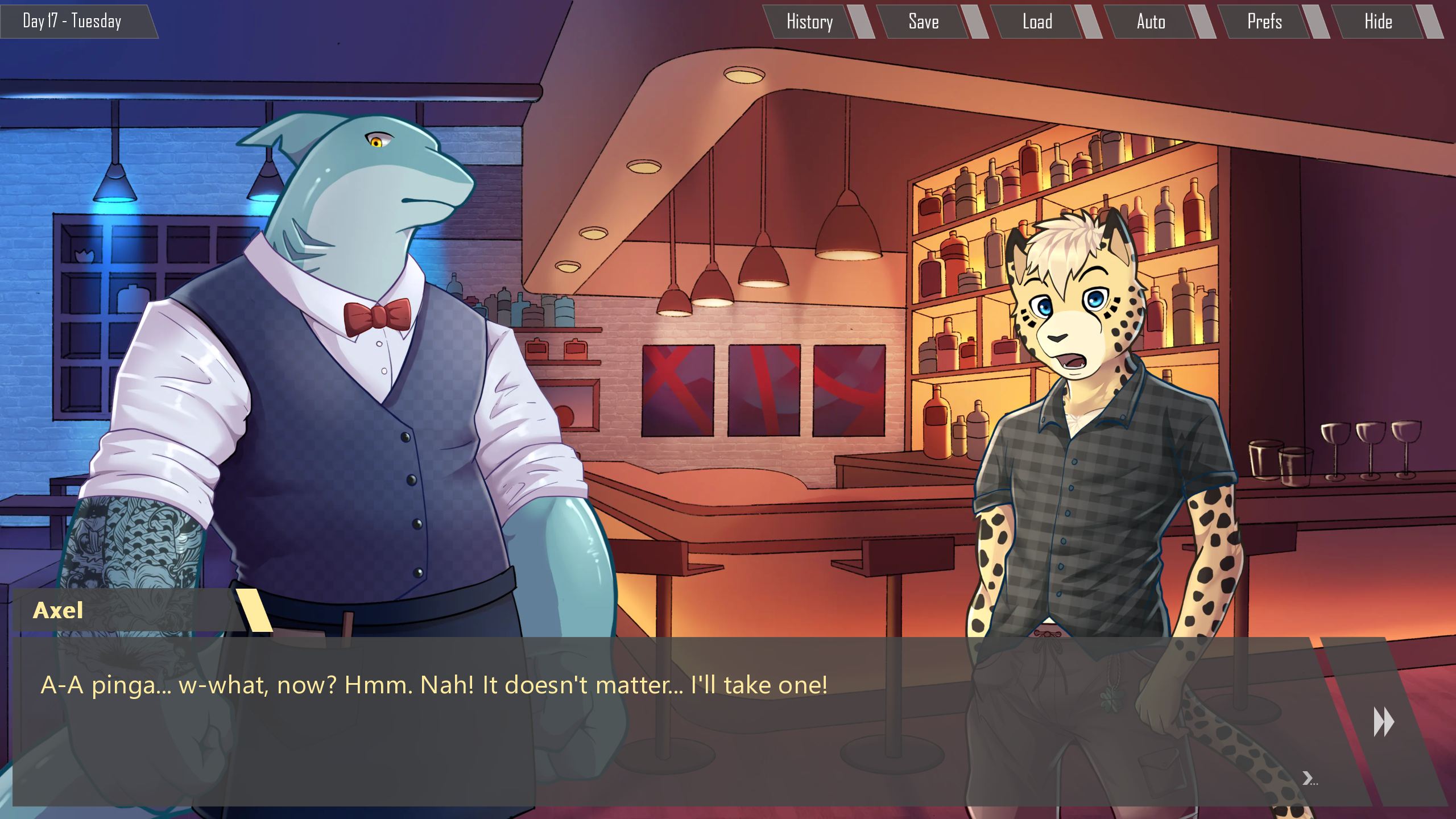 IM SAD CAUSE I ALREADY FINISHED DAY 17 OF TAI

So Mostly there is something going on, thats in the ICECREAM as its causing this.

What if everyone is just lactose intolerant or something? 🤔

ah yes mariah has awoken from her deep frozen slumber

give reverence to our dark lord

i think that Halloween is the hottest month of the year because of hot monsters roaming in the streets but ho boy. there you go again adding some really hot shit in the game. why... why torment me because his only a side character. first Logan and now Maxwell. augh..... help. hot dragon dad alert.

bruh have you seen that shit?!

WELL IM HAPPY YOU KNEW CAUSE I KNEW BEFORE I SAW THE CHAT WITH AXEL.

I got a question is Logan an optional character to be with?

This is answered in our FAQ. Please go have a look. http://faq.sileo.vn/

Yeah m early this time... Thanks Xevvy for this update. Really appreciate that! 😍